There are bucks and then there are big bucks. Make no mistake; they are not one in the same. Big bucks are generally old bucks, and they’ve reached that advanced age for a reason. They’re wise, they’re wily and they know what it takes to survive, which includes staying away from you. So, how do you put the odds in your favor when Mother Nature is betting against you? Look to those who’ve done it and learn their secrets.

Chris Parish, also a Knight & Hale Ultimate Hunting Team pro staffer, makes a living out of tracking down and taking huge bucks, and he has some tips for you.

1)     Plan your hunt around big-deer movement:  Big, older deer simply do not move as much as younger deer.  So, you must time your hunt to when big deer move, which requires observing the moon phase.

“Watching the moon phase is especially helpful in the early season,” Parrish said. “An early moon rise gets big deer on their feet, so try to hunt on a day that the moon rises before nightfall.  And, don’t hang your stand right on your food source. Even though big deer will be up and moving, they may still wait until dark to move out into the field. So, hang your stand between 30 to 100 yards from your food source, so you can catch him as he’s slowly makes his way to dinner.”

2)     Pay attention to wind direction and thermals:  Don’t waste your time hunting a particular spot when the wind is bad.

“Give a lot of thought to how the wind pushes through an area,” Parrish said. “Study where you think the deer will come from and where it will go, and set up your stand so you have a crosswind. If you do so, you’ll have a good chance at getting off as shot before the deer gets downwind.  Of course, using a game camera can give you an idea of how the deer typically move in the area.” 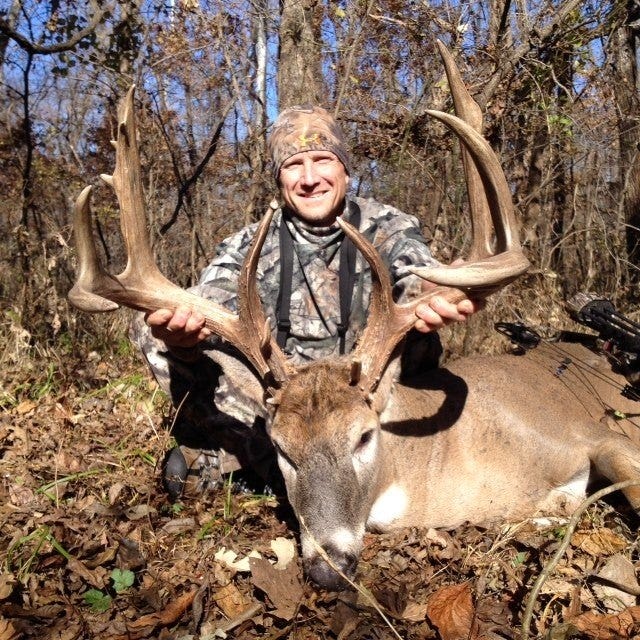 3)     Plan how you’ll walk to and from your stand or hunting location: Do all you can to avoid busting deer as your coming and going before and after your hunt.

“The way a hunter walks to and from his or her stand is probably one of the most overlooked aspects of hunting,” Parrish said. “One of the biggest mistakes a hunter can make is walking through a food plot he or she just hunted over once it gets dark. Even if you don’t bump deer, you leave a scent trail behind wherever you walk. So, travel to and from your stand via a pathway that is least likely to disturb the deer in the area.”

4)     Hunt high and leave cover:  “I don’t hunt in a stand that’s less than 15-feet high,” Parrish said. “In fact, I prefer to hunt between 20- to 22-feet high. I also prefer not to cut a lot of shooting lanes because the big guys will bust you. Sometimes people will cut a bunch of shooting lanes in the early season only to end up totally exposed when the foliage thins and the rut comes around.”

5)     Focus on travel corridors, especially during the rut:  During this time of the season, big bucks will be moving between the does’ bedding areas and their feeding areas in search of receptive does.

“Find the narrowest pinch in the terrain that will force the deer to certain area where you will have a good shot opportunity, especially when bow hunting,” Parrish said.

6)     Take extra steps to remain scent-free: You need to shower in scent-free soap, wash your clothes in scent-free detergent and avoid perfumes. But, if you wear your hunting clothes in your truck on the way to your stand, you’ll contaminate them with scents, rendering your previous efforts for a scent-free hunt less effective.

“Your vehicle is a scent-wick,” Parris said. “If you’ve eaten burgers, drank coffee or hauled kids in your truck, all of those scents will end up on your hunting clothes. So, carry the clothes that you’ve washed in scent-free laundry detergent in a sealed bag, and don’t put them on until you reach your hunting destination.”

7)     Hunt hard-to-reach locations: Use maps, aerial photos, your compass and GPS to locate honey holes in the deepest, hardest-to-reach spots that few other hunters will access.

“That’s where you’ll find the big bucks,” Parrish said. “You may see big bucks close to access points, but they’ll eventually get pushed in to these hard-to-reach locations. Don’t be a lazy hunter. User your tools and technology to hunt places other hunters don’t.”

8)     Don’t check your game cameras too frequently: Game cameras are a great scouting tool, but if you check them too often, you contaminate the area with your scent and end up scaring the deer away.

“Put your cameras up in the early season over a food source, trophy rock or mineral,” Parrish said. “After leaving them up for three to four weeks, pull the cameras and get out of area. Don’t put them up again until you see scrapes appear; then put them near the scrapes. Let them sit on the scrapes for five to 10 days; then pull them off. When late season arrives and the deer move to food sources, put the cameras on the trails to the food sources. The point is, move the cameras around and don’t check them too often.”